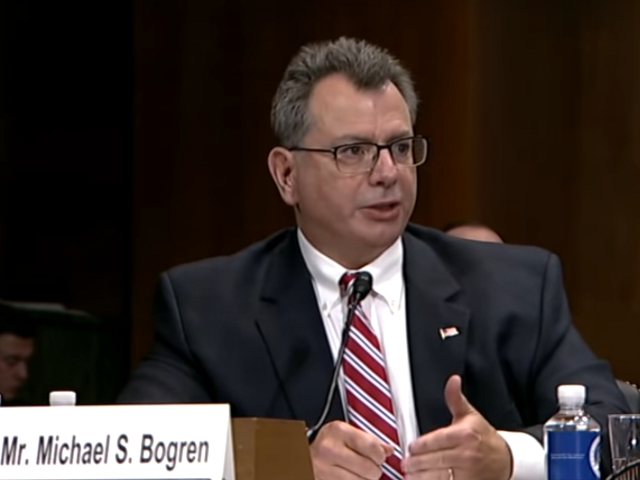 Conservatives strongly believe in the Constitution’s guarantees, especially the First Amendment right to the free exercise of religion. This right encompasses not only the freedom to worship, but also the right to live consistent with one’s faith. That is why we are shocked and dismayed with the recent testimony of Michael S. Bogren, nominated to be United States District Judge for the Western District of Michigan on the recommendation of Michigan’s two Democratic senators.

As a practicing attorney, Bogren was hired to represent the City of East Lansing in a dispute with a local farmer, Steve Tennes. Tennes was barred from selling his wares at the city’s farmers market, because he refused to host same-sex marriages at his farm.

Bogren has made several statements that reveal he does not understand the First Amendment’s basic protections of religious liberty. For example, he professes an Obama-era “freedom of worship” understanding of free exercise when he says that “the fact that the plaintiff says, ‘My religion compels me,’ does not protect him. There’s a difference between belief and act.” [1]  Bogren also signed onto motions which characterized the Tennes family’s practice of their Catholic faith as “invidious discrimination against the LGBT community.”[2]

Equally troubling are the analogies Bogren drew between faithful Catholics and virulent racists. In particular, he directly compared Catholics honoring their faith and the Ku Klux Klan:

“The other side of that discriminatory coin is found on the website of the White Camelia Knights of the KKK… group states: ‘The Klan has always taken a strong stance against interracial marriage. What most people don’t understand is it’s against our Heavenly Father’s law.’ Again, an adherent of that particular brand of Christianity who ran a business similar to the plaintiffs’ business would not be able to invoke the free exercise clause to avoid the antidiscrimination provisions of Federal, State and local laws that apply to public accommodations if interracial couples were refused service.”[3]

Bogren also directly questioned the sincerity and consistency of the Tennes family’s faith, arguing: “Although plaintiffs rely on the teachings of the Roman Catholic Church to support their position on same-sex marriage, plaintiffs are rather selective about how they apply the tenets of the Church on other aspects of marriage when it comes to their own business.”[4] He repeated the charge later, noting that “plaintiffs selective incorporate the Roman Catholic tenets on marriage when it comes to their wedding business.”[5]

Bogren was given a chance to clarify these statements when asked about them during a hearing in the Senate Judiciary Committee on May 22, 2019.

Rather than defer to his role as the counsel of record in an ongoing case—in particular, a case that will be heard in the federal district where he is nominated as a judge—Bogren chose instead to reaffirm his position that the government can impose liberal beliefs on sexual orientation and gender on Christians.

When asked by Sen. Josh Hawley (R-Mo.) to clarify whether or not he saw “Catholic families, pointing to the teachings of their church, [as] equivalent to a KKK member invoking Christianity,” Bogren answered, “there is no distinction.”

Senator Hawley then asked Bogren to clarify his comments that the Tennes family are “selective” in how they apply the teachings of their faith. Bogren reiterated his view that they apply their faith selectively “at times.”

This reveals that Bogren has left legal analysis behind and believes that government entities are entitled to judge theological matters. Long ago, in Thomas v. Review Board, the Supreme Court held that it is not the role of the judiciary to determine issues of theological consistency. Bogren’s argument reveals religious bias lacking even the usual effort of a thin disguise.

We recognize and respect the importance of an attorney representing the interests of his client. Bogren could and should have declined to answer questions regarding ongoing litigation. Instead, he chose to double down on arguments which sharply narrow the First Amendment’s protections regarding religious liberty.

Bogren is nominated for a lifetime appointment. We believe that his suspect judicial philosophy as it relates to America’s First Freedom renders him unqualified for this position. We urge that his nomination be withdrawn.